Mallorca has increasingly become one of Europe’s top residential locations boasting a growing number of wealthy residents and visitors. TV productions from Germany and the UK have long discovered Mallorca’s potential and continuously report about the Island’s upmarket businesses and properties, often in cooperation with Deluxe magazine.

German Spiegel TV Reportage about a Rolls-Royce event in Mallorca 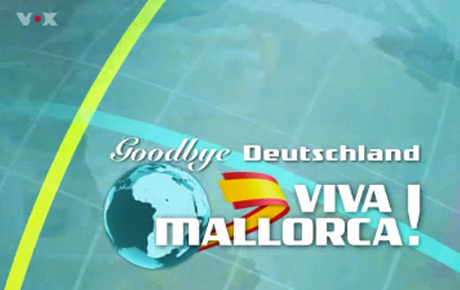 Deluxe Mallorca had organized the opening party of sports club RBC in Santa Ponsa, Mallorca. Goodbye Deutschland was present to report about the afternoon event with celebrities, veggie catering and fruit juice bar – only.

A camera team accompanied Birgit Unger, Editor of Deluxe Mallorca Magazine, for a report about the lives of two working mothers in Mallorca. The show Punkt 12 was broadcast on RTL on 20th and 21st February 2014. 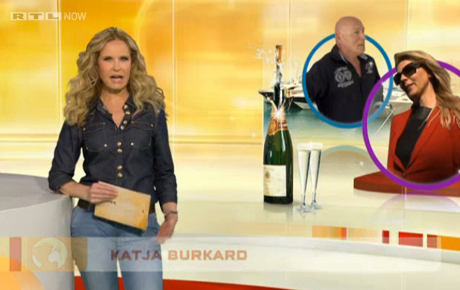 A team from Filmreif TV accompanied Birgit Unger, Editor of Deluxe Mallorca Magazine, for four days as she worked on the summer 2013 edition of the magazine, interviewed a designer and visited the Superyacht Days in Port Adriano. The show Punkt 12 was broadcast on RTL on 23rd May 2013.

German television channel ZDF accompanied the Deluxe photo shoot with Lucas Cordalis, for which the musician had selected two locations: the Nassau Beach Club on Playa de C’an Pere Antoni in Portixol and Harry’s Bar in Palma, both of them popular meeting places for celebrities. “The look in the photos is a deliberate break from my usual image,” Lucas Cordalis told ZDF editor Stefanie Wolf. He spoke to her about show business and his private life for the lifestyle show ‘hallo: Mallorca mondän’, which was broadcast in July, 2012, and showed the glamorous side of the Island. Photos: Jan Kohlrusch 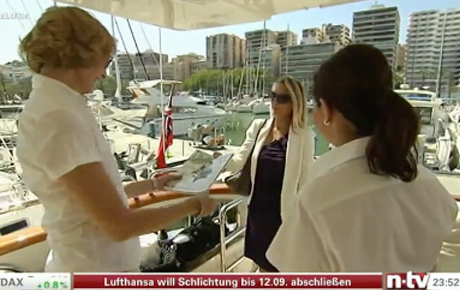 N-tv ‚Deluxe – Alles, was Spass macht‘ spent a day accompanying the editor of DELUXE Mallorca Magazine Birgit Unger as she took a test drive in an AC Cobra on the Circuito Mallorca race track and visited the 34-metre Camper & Nicholson charter yacht ‚Itaca‘ in the port of Palma. 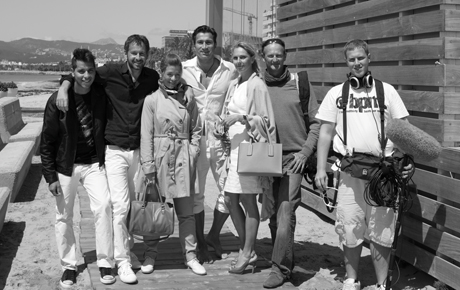 German television channel ZDF accompanied the DELUXE photo shoot with Lucas Cordalis, for which the musician and Superstar photographer Jan Kohlrusch had selected two locations: the Nassau Beach Club on Playa de C´an Pere Antoni in Portixol and Harry’s Bar in Palma, both of them popular meeting places for celebrities. “The look in the photos is a deliberate break from my usual image,” Lucas Cordalis told ZDF editor Stefanie Wolf. He spoke to her about show business and his private life for the lifestyle show ‘hallo mondän Balearen’, which will be broadcast this summer and will show the glamorous side of the Islands of Mallorca and Ibiza.

For the series ‘Die Urlaubsprofis’ (The Holiday Professionals) on Sat 1 Breakfast Television, editor Samuel Dürr and cameraman Robin Ahne spent a day shadowing Oliver Gekeler as he went about his work. By appointment, the German anti-aging specialist at the MEDEX Medical Centre in Reutlingen visits his clients at home – even in Mallorca. Deluxe editor Birgit Unger met Oliver Gekeler in Puerto Portals to interview him about his minimally invasive treatment methods, and innovations in the field of preventative medicine. 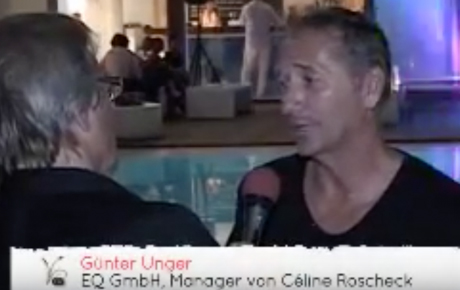 Majestic and elegant, seductive and remote, Céline Roscheck, top model and violin virtuoso is finally bridging the gap between chillout and classical, between mixer and Mozart. Her concert at Hotel Zhero, Palma de Mallorca in August demonstrated the arrival of a completely new genre that in addition to a crossover of sounds, also unites fashion and style with music. In shorts and a sequined top, Roscheck scored on three levels: as a virtuoso, a composer and a beauty queen. 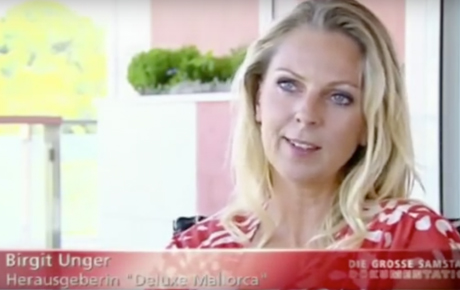 In the four-hour VOX documentary ´50 years of Mallorca – the changing face of the party Island´ shown on 15th October, key witnesses from the Island – hoteliers, residents and journalists, including DELUXE editor Birgit Unger – provided the commentary between scenes of the horse and cart and cabriolet, between Franco and modern Spain, between the Boeing 727 and the Airbus jet, to give an eloquent overall picture.

It also interweaves a photo shoot with actress Sonja Kirchberger with footage of the Mallorquín Matanza. A unique world, that also brought forth DELUXE magazine as the expression and the voice of its most elegant facets – a whole ten years ago. 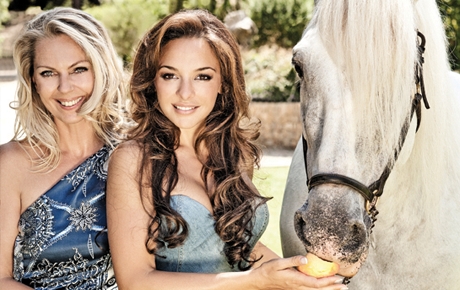 The beauty from Paraguay took part in a photoshoot for Deluxe that was shown in a Balearic special of the German Pro7 show ‚Red!‘

For DELUXE Mallorca Estefania Küster did a very special photoshoot with up-to-date fashion from Roberto Cavalli and Ermanno Scervino. The photoshoot was filmed by a team from Pro 7 television for a Balearic special of the show ‚Red!‘ which was aired shortly before this edition of the magazine came out. Filming took place at Estefania’s home, former stables, which the aspiring interior designer has refurbished with the help of several craftsmen and her partner Pino Persico (owner of Restaurant Campino in Camp de Mar), and turned into a real gem.

‚hallo deutschland‘ reports on Mallorca as a five-star destination

In mid June, as part of the programme ‚hallo deutschland‘, the television channel ZDF gave coverage to Mallorca as a luxury destination. The channel accompanied the editor of DELUXE Mallorca magazine Birgit Unger as she worked and interviewed her about her private life. The glossy magazine Deluxe Mallorca is also on sale at selected kiosks in Germany, Austria and Switzerland. The show gave readers a glimpse behind the scenes of the magazine. ZDF observed her, for example, on the high seas on a visit to Sunseeker. For anyone who does not own a property on the Island, hotels are an important starting point. In one of the most exclusive, the St. Regis Mardavall, Birgit met up with the hotel manager Christian Hollweck, who showed her one of the suites – and also specialities from the kitchen of head chef Thomas Kahl. All in all, an interesting insight into the work of the Deluxe editor, and into what interests the top ten thousand in Mallorca.

In upmarket second home locations, and Mallorca has been one of these for a long time now, the interior designer is as important to a real-estate agent as the elves are to Santa Claus. The German TV channel Vox once again demonstrated this truth in its highly successful show ‘Mieten, Kaufen, Wohnen’ (Rent, Buy, Live), shown on 13th April. The programme, which attracts premium viewing figures among German TV audiences, focused once again on top-end modern villas in Mallorca. In the programme, real-estate agent Marcel Remus showed Birgit Unger, editor of LE DELUXE, two upmarket properties in the sought-after southwest of the Island. 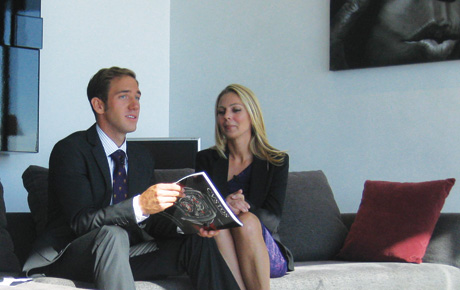 The Island’s potential has been discovered by the successful German documentary series ‘Mieten, Kaufen, Wohnen’ (Rent, Buy, Live), which for the past three years has been shown on Vox at 6pm almost every evening, and has achieved peak viewing figures of up to two million viewers.

The show offers viewers an insight into the local market, which is markedly different from that in Germany. At the moment, the south-west of the Island is in particular demand, especially Puerto Andratx and Sol de Mallorca. These were also the places chosen by Birgit Unger, publisher of the magazine DELUXE Mallorca, when she viewed two properties together with Marcel Remus for the Vox series Mallorca special. „The filming portrays the exclusive side of the Island and also the glossy magazine Deluxe Mallorca.“ The first episodes of the show, which is produced by Cologne-based company Fandango, were broadcast in December 2010.

In August 2009, Kurt Lehmann, Managing Director Sanlorenzo Baleari, exclusively invited a select number of clients to the 2-star-Restaurant Tristán in Puerto Portals, Mallorca, for a cocktail reception and gourmet dinner to present a Sanlorenzo SL82 – a classic yacht with an innovative interior design concept and a new flybridge-layout, that could be viewed at the Tristán pier during the event. The SL82 is a motor-yacht suited to travel long distances but also, as it is easy to control, for weekend cruising.

Amongst the many high-profile guests of the Sanlorenzo presentation was Boris Becker with wife Lilly. Deluxe Mallorca reported about both the yacht and the event.

Mallorca was the logical choice to join Moscow, Dubai, Vienna and Munich as the latest venue to host a luxury trade fair.

Spread over two days and one night, the exclusive event was held at the breathtaking venue of the Hotel Blau in Porto Petro, Santanyi, in 2008. A get-together for exceptional people from Mallorca and all over Europe, this highlight of the social calendar showcased goods and products from over thirty select providers such as Quality Center Mallorca, who presented the latest Maserati Granturismo S, two Bentleys, the Aston Martin V8 Roadster, a Lotus Elise and the Ferrari F430 Spider. Other exhibitors included Zenana Jewellery and Hästens. There was also a camera team from Germany’s second main broadcaster ZDF to cover the occasion.